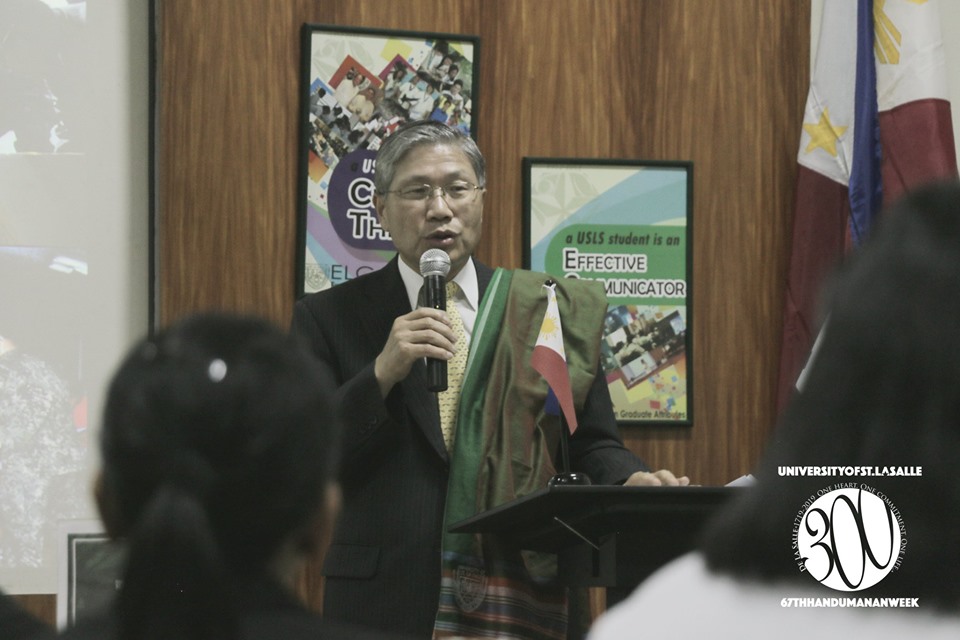 The Lasallian Community welcomes His Excellency Ambassador Han Dong-Man from the Republic of Korea to the Philippines for the Institutional Visit and Bilateral Collaboration in the University of St. La Salle last July 2, 2019.

Ambassador Han Dong-Man graduated with a Bachelor’s Degree in Mass Communication at Yonsei University in South Korea and Masters in International Administration at the Pantheon-Sorbonne University in Paris, France. He has more than 30 years of experience in representing his country through policy planning, trade issues and public relations. With more outstanding experiences, he then assumed the post of Ambassador of the Republic of Korea to the Philippines last January 2018.

When he visited the University yesterday he discussed how the Philippines helped South Korea during the Korean War and how both countries maintained 70 years of friendship.

The University of St. La Salle established linkages with other international institutions in other countries through the Center for Linkages and International Affairs but by far the most number of connections we have is with South Korea, hence Ambassador Han Dong-Man along with his first secretary Song Areum visited the University to discuss the ongoing peace process in the Korean Peninsula and the bilateral relations between Korea and the Philippines.

It has been many years since the North and South of Korea has been divided by the Korean War, they have went through a series of conflicts throughout the years of division but through talks and exchanges have persistently striven to heal from the tragedy and achieve permanent peace until the Overall Assessment of the Inter-Korean Summit last April 2018 through the Panmunjeom Declaration for peace, prosperity and unification of the Korean Peninsula and the adoption of the Pyongyang Joint Declaration.

The Philippines became one of the first Association of Southeast Asian Nations (ASEAN) countries to establish diplomatic relations with the Republic of Korea in 1949. A total of 7,420 Filipino soldiers as the Philippine Expeditionary Force to Korea (PEFTOK) fought gallantly in the Korean War where 112 perished and 299 were wounded, resulting in both countries having a unique and lasting friendship over the years.

When Typhoon Yolanda hit the province of Leyte in 2013, Korea dispatched its first and largest peacetime operation unit which came to be known as the Araw Contingent where the members of military engineering and medical corps stayed in Leyte for a year to help Filipinos with relief and rehabilitation operations. And during the conflict in Marawi, the Republic of Korea donated P5 Million Pesos to the Philippine Red Cross to those who were affected by the armed conflict. There are also many other projects in which Korea has helped the Philippines.

Korea and Philippines had a Bilateral Meetings last November 2017 and June 2018. A resolution was adopted last February 8, 2019 from the Congress of the Philippines House Resolution No. 189 wherein the Year 2019 will be the Year of Mutual Exchanges between the Philippines and the Republic of Korea in Celebration of the 70th Anniversary of their diplomatic relations.