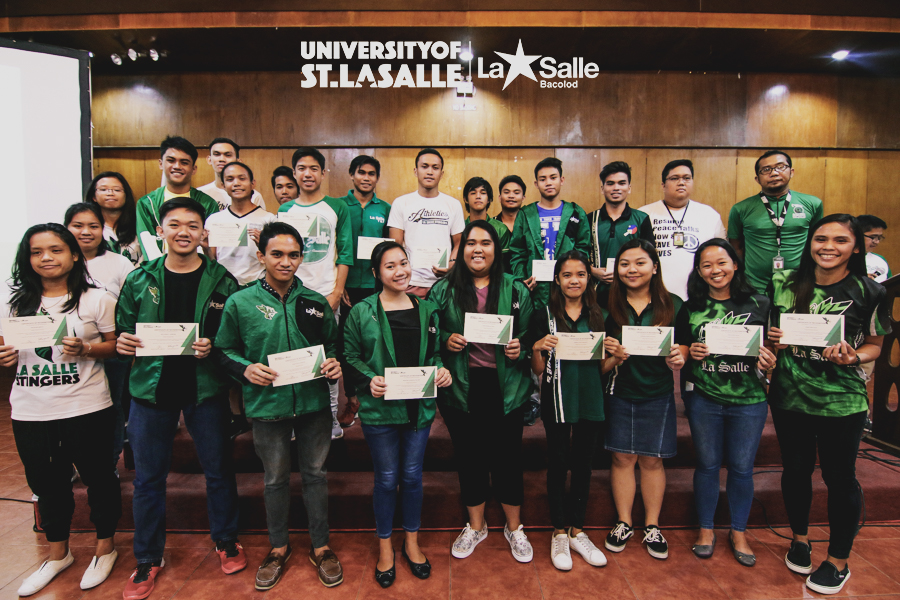 What makes a student athlete?

Being an athlete is obviously hard enough as it is with the discipline and work one has to put into it. But being a student, too?

This is why USLS’ athletes deserve the accolade on April 11, 2018, when varsity athletes, coaches, patrons, and administrators gathered at the Santuario De La Salle to celebrate this year’s Stingers' Recognition Night.

In his welcome remarks, President and Chancellor Brother Kenneth Martinez, FSC thanked everyone involved in the institutional varsity sports program.

He praised the athletes, saying having to maintain their grades on top of their training was "like having two jobs” as he held up sports as a metaphor for life. "The difficult comes first before it becomes easy."

"Always start with a prayer and end with it,” Brother Kenneth reminded everyone. “Always keep the Animo alive; that at all times we are Lasallians and professionals in the making."

Rising to the challenge, the athletes proved that there is more to them than physical prowess and academic achievement, baring other talents in the intermission numbers: the Table Tennis team’s guitar-backed song, the dance of the Volleyball Men, and the performance on violin by a member of the Chess Team.

But it was the beatbox skills of the Athletics team’s representative and the song of the Sepak Takraw team that proved worthy of the Best Performer Award.

Certificates were given to the Champion Teams of 2018, the new batch of graduates, the coaches, and the patrons in recognition of their efforts.

Brother Butch Alcudia, FSC gave a message in behalf of the Brothers Community, pointing to this year’s theme, "Play Hard, Study Harder," to remind the Stingers that they are students before they are athletes.

He then urged them to "thank the people who made your success possible. I encourage everyone to stand up and say thank you to your coaches."

Mr. Joseph Christian Fernandez ended the night by acknowledging the people who have supported sports in USLS.

"Life goes on every season and hopefully the learning goes with you as you mature," he told the athletes.